Crows and Cats by Andrew White

A blog about mathematical modeling, programing, chemistry and statistics. See this post for information on my new blog. I have put my older posts here, but they are best viewed at my old url: crowsandcats.blogspot.com.

I’ve decided to start summarizing literature topics on areas I’m interested in on my blog. I’m starting with peptide self-assembly of diphenylalanine. This is a very incomplete survey of work on it.

One of the most common self-assembling motifs is diphenylalanine, or FF in the amino acid code alphabet. FF is the shortest self-assembling peptide sequence. It is stable up to 100°C and 150°C with dry heating (Sedman, Adler-Abramovich, Allen, Gazit, & Tendler, 2006), it has a Young’s modulous of 19 GPa (somewhere between human bone and concrete) (Kol et al., 2005) and is stable in harsh solvents such as acetone and alcohol (Adler-Abramovich et al., 2006). FF, or some variation of it, is thought to become an important building block in future biological applications (Yan, Zhu, & Li, 2010).

Metadynamics is a way of overcoming energetic barriers in molecular simulation (Laio & Parrinello, 2002). It’s part of a class of algorithms that focus on making rare-events more frequent in simulations. It’s been getting quite popular: it even has it’s own wikipedia page. One problem with the method is that it has systematic errors at boundaries and this was recently fixed via a method introduced by Michael McGovern and Juan de Pablo (McGovern & de Pablo, 2013). I’m recording the equations here in, since I use an implementation of it and the derivatives weren’t shown in the manuscript, which are necessary for the implementation.

I decided to make a graphic representing the materials described in Sun et al. (Sun et al., 2012) Nickel-rich transition metal nanoparticles, LiNiMO, where M is the transition metal, have high energy density. In this paper, they added a gradient between a nickel-rich core and a manganese outer-shell that has good energy density (215 mA h g) and good thermal stability at high temperature, a common failing for other nanoparticle-based cathode materials. They also added a secondary needle-like particle, which I didn’t put in my graphic. Here’s the picture: 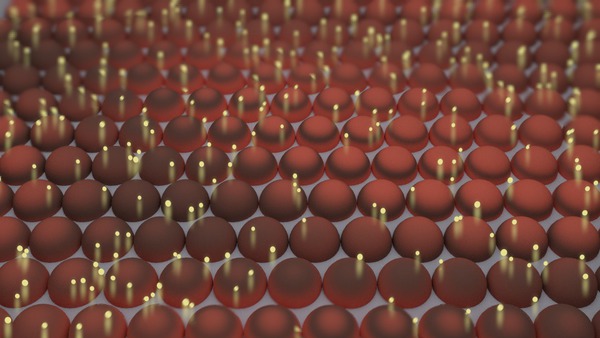